The United States government has denied carrying out an airstrike which killed 6 high-profile members of Iraq’s Popular Mobilization Forces (PMF), an umbrella group of Iran-backed militias.

Multiple reports alleged that the PMF members were travelling in a three-car convoy north of Baghdad, when the strike occurred.

While Iraqi State TV said the latest strike which left three others injured was carried out by the US, the US-led coalition fighting Islamic State said on Saturday January 4 that it did not conduct any air strikes near Camp Taji north of Baghdad.

“FACT: The Coalition @CJTFOIR did NOT conduct airstrikes near Camp Taji (north of Baghdad) in recent days.” 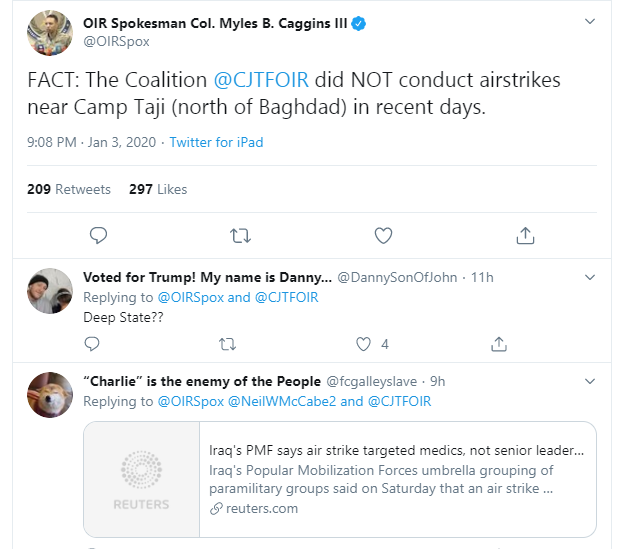 Iraq’s military also denied carrying out the air strike which struck a a medical convoy in Taji, north of Baghdad.

This is coming after Newsweek reported that Pentagon officials said that the US carried out a strike that meant to target the Imam Ali Brigades.

They further claimed it is likely that the leader of the group, Shubul al-Zaidi, was killed, Newsweek reported on Saturday. However, the PMF initially said that medics were killed, but no senior officials were among them.

Check out the most expensive bottled water in the world, costs $60,000

The most expensive bottled water in the world, Acqua di Cristallo Tributo a Modigliani, costs a whooping $60,000 per 750ml. Some very expensive items in the world cost that much because of how rare and exotic they are while others have simply been turned into luxury products and an example is the bottled water. $60,000 […]

President of Russia, Vladimir Putin has ruled out legalizing gay marriage in his country. Speaking on Thursday in Kremlin, where he met a state commission to discuss the changes to Russia’s constitution, the 67-year-old spoke against allowing the traditional notion of mother and father to be ‘subverted’ by what he called “parent number 1” and […]

Japanese billionaire, Yusaku Maezawa has announced that he will be conducting a social experiment by giving out $9 million to 1,000 people on Twitter to see if it improves their happiness. The online shopping mogul who made the announcement via a YouTube video, described the contest as a “serious social trial” to see what impact […]