@Tife_fabunmi claimed he was “born dead” and woke up “hours later”.

He claims in his tweet: “I was born dead, woke up many hours later, lost my tongue at 3, couldn’t speak for almost a year, today I can speak three languages fluently and tomorrow I’ll be a year older. Hahahaha.”

He said he “lost” his tongue in school when he fell and it split in two.

Read the rest of what he wrote below. 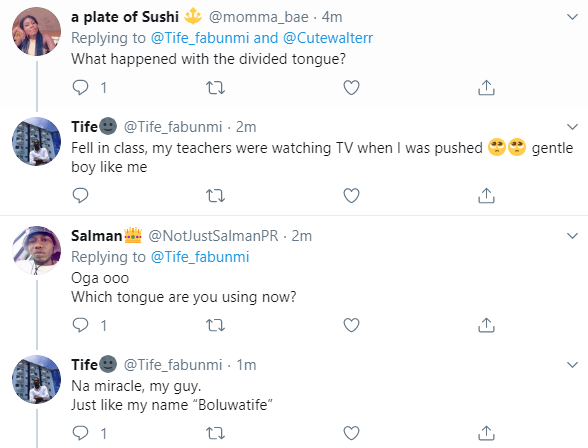 The Imo State Police Command has arrested one pastor Kenneth Onyeali, a Pastor of one of the new-generation churches in the state for allegedly defiling a 10-year-old girl and her 16-year-old sick elder sister. The general overseer of Christ New Covenant Church located in Umuagwo in Ohaji Egbema local government area of Imo State, allegedly […]

FCMB In Search Of ‘little Dele’, the Girl Who Used ATM Light To Write Her Assignment

First City Monument bank have embarked on a search for a little girl who went viral after she was pictured using their ATM light to write her Assignment. The girl identified as Dele was said to have been seen along Yaba Road creatively using the light from the ATM for her school work. Responding to […]

God told me Naira Marley is a Demon, he is Satanic and should repent before it’s too late- Apostle Chris Omashola blows hot