Instagram Comedian Josh2funny has  shared a screenshot of a chat between him and his father.

In the screenshot, the protective dad is seen warning Josh to be careful who he lets place hands on his head.

“Be conscious of your glory,” Josh’s father warned as he reacted to a photo of a man’s hands placed on Josh’s head.

The comedian told his father the hands on his head belongs to his barber. But his father was still not satisfied.

He responded to Josh: “The way he’s doing it is suspicious.”

See their chat below. 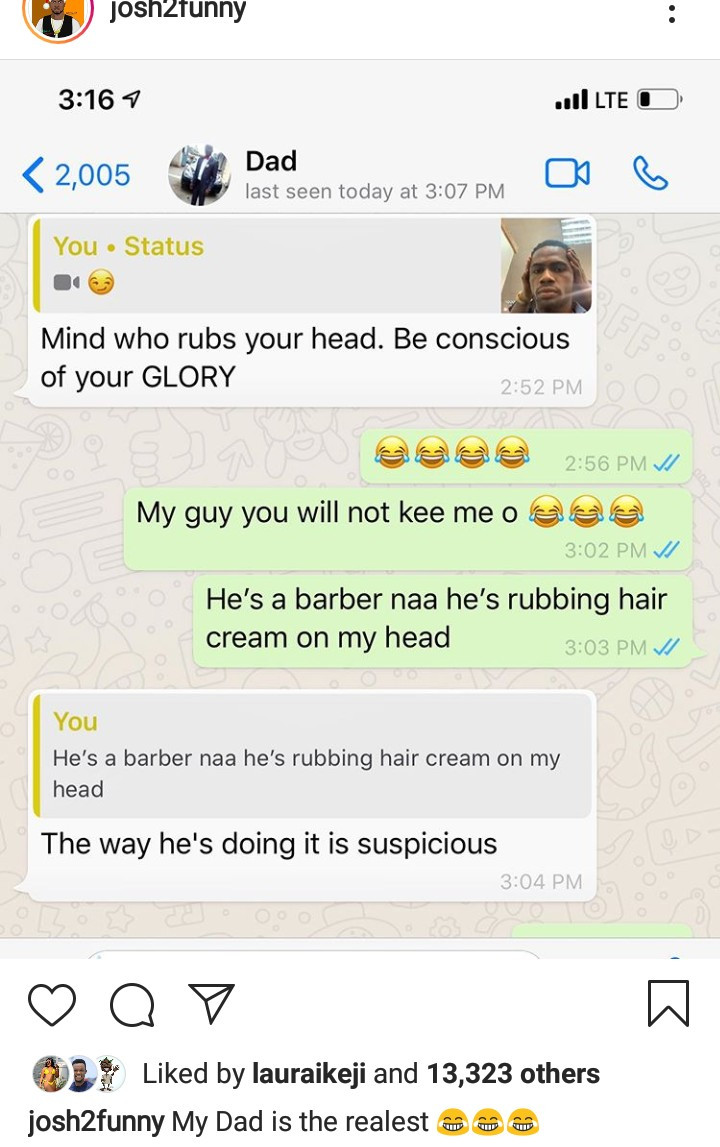 Gospel singer, Tope Alabi reacts after she was criticized over her ‘worldly’ dance step (video)

Renowned Nigeria gospel singer, Tope Alabi has reacted to being called out over her “worldly dance moves” in a video which went viral on social media. Some social media users who called out the gospel singer, said she is deviating from who she was 10 years ago. A Facebook user, Adeniji Aderogba wrote; This is […]

Tanzanian singer, Hawa reveals why she drew tattoo of Diamond Platnumz on her bust

Tanzanian songstress Hawa of the Nitarejea fame has revealed why she drew the tattoo of Diamond Platnumz on her bust. The singer who recently came back from an illness stated that it was to show how much she appreciates what Diamond Platnumz did for her. Hawa was flown to India where she got treated with the bills settled […]

Singer, Abolore Adegbola Akande popularly known as 9ice is set to tie the knot with his babymama, Olasunkanmi Ajala this month. His happy wife to be and mother of his daughter, Michelle Abolanle Akande, took to Instagram to share beautiful pre-wedding photos ahead of their big day. The event planner wrote in one post: ‘You’re […]