Yesterday, Burna Boy made a claim on Twitter, throwing the social media space into a arguments and chaos. Fans have been taking sides since then.

Burna Boy had tweeted yesterday: “FACT is I have always known I am the best.” Shunning a lot of Nigerian artistes and claiming no one paved way for him. 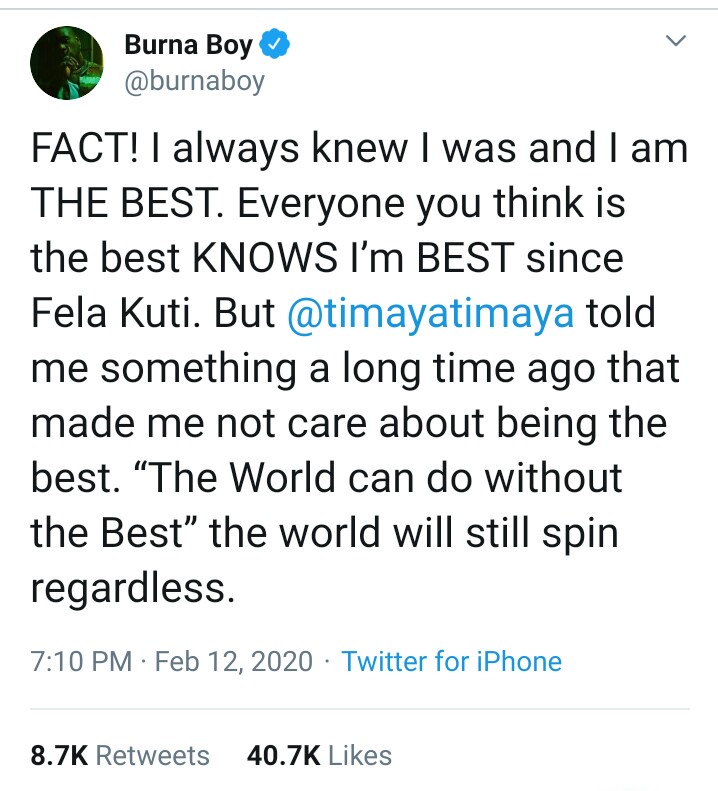 Most Nigerian artistes have been quiet since the statement, choosing the let the heat pass. And the few that has seemingly spoken have been sure to be careful, in giving a full response. But fans are reading into the innuendo as much as possible.

While Erigga was more explicit, saying Burna Boy can say what he wants, and that Nigerian artistes were perhaps secretly hoping Burna Boy does not win the Grammy, others like Adekunle Gold and Reekado Banks have tweeted simply without calling names. With Adekunle Gold tweeting during the debacle on Twitter a simple message: God is the greatest.

Reekado Banks has also tweeted his own implicit response. And fans as usual quickly latched and read into it. Read fan reactions below. Burna Boy might just be watching. Popular Nigerian male barbie, Bobrisky, has announced that he has decided to revamp his features, saying he would soon be going for a face surgery. The cross-dresser, explained that he made the decision so that he would become prettier than he already is. Bobrisky, who made the announcement on his Instagram page, also shared what […]

Nigerians react to Davido and Chioma unfollowing each other on Instagram

Nigerians have reacted to Davido and Chioma unfollowing each other on Instagram shortly after Golden Boy CEO, King Patrick alleged that Chioma was Peruzzi’s side chick.   The recent development has led to speculation of an unconfirmed claim of ‘trouble in paradise” even though the couple welcomed a son together few months ago.     Here […]